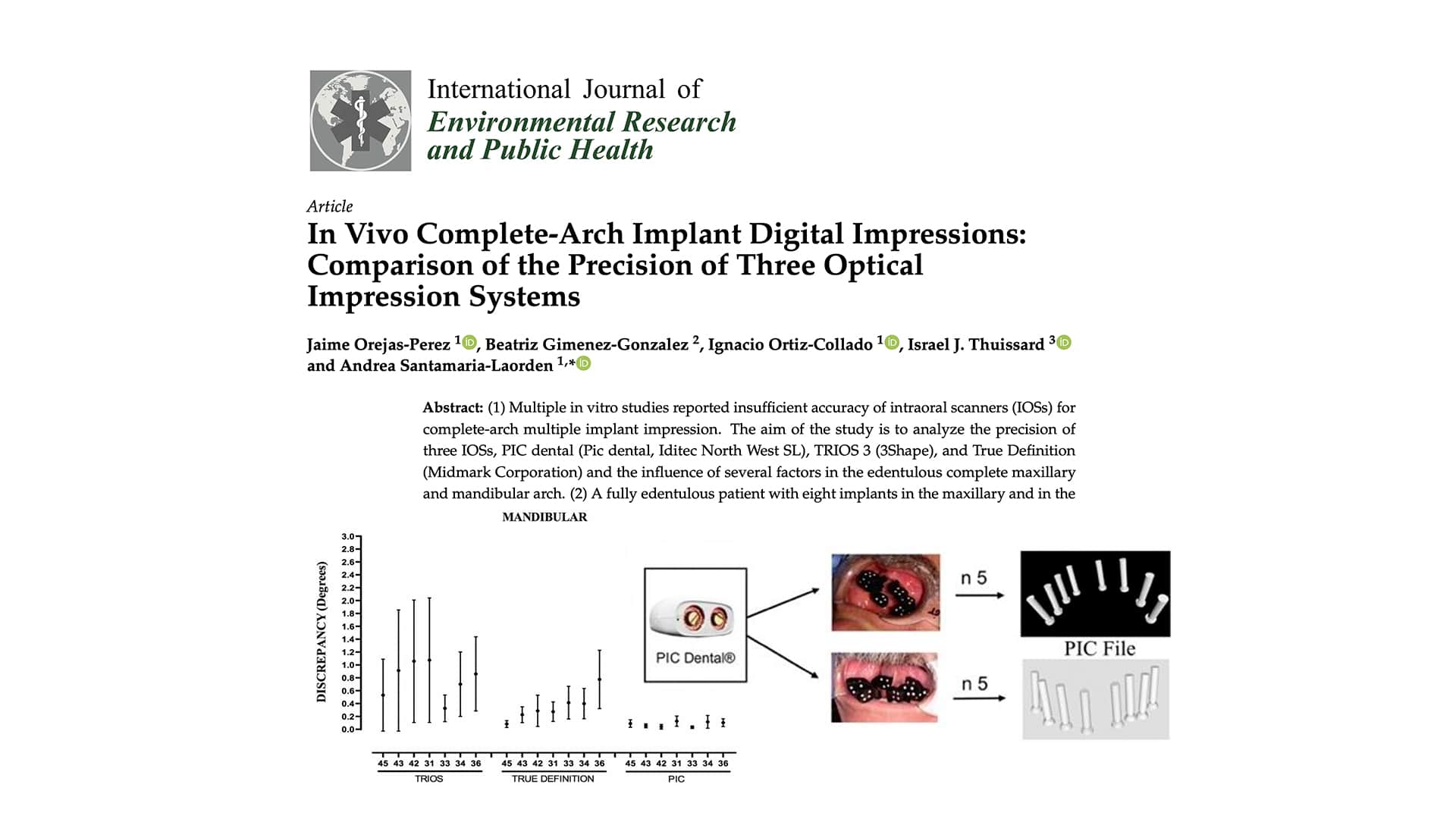 This in vivo clinical study compared the accuracy of various optical impression systems in a full arch, resulting in the PIC system providing the best precision.

A new in vivo study of the legacy PIC system was published last month in the MDPI’s International Journal of Environmental Research and Public Health.

This study, done by Dr. Orejas Perez and his collaborators, compares the legacy PIC system, our implants oral scanner, with two intraoral scanners to analyze their precision in the edentulous complete maxillary and mandibular arches.

As this is an in vivo study, the findings are highly valuable. As the article itself states, "The majority of studies that evaluate IOSs are performed in vitro and, therefore, lack the challenges that the IOSs face in vivo”.

In vitro conditions significantly reduce the clinical reality of other methods used in these comparisons. For IOSs, these include the operator's skill and scanning strategy, the number and distance between implants, the mouth opening of the patient, ambient light, saliva, and many others that can contribute to the misfit of the prosthesis.

The PIC system always delivers consistent clinical results in vivo regardless of these factors, with a guaranteed passive fit, and this study provides excellent proof of its predictability.

The study was performed on both arches of a fully edentulous patient, with several impressions per arch completed with each technique: an impression with the legacy PIC system and scans with True Definition® and Trios 3Shape® intraoral scanners. The minimum, mean and maximum deviations of the distances and angulations were then calculated for each technique. 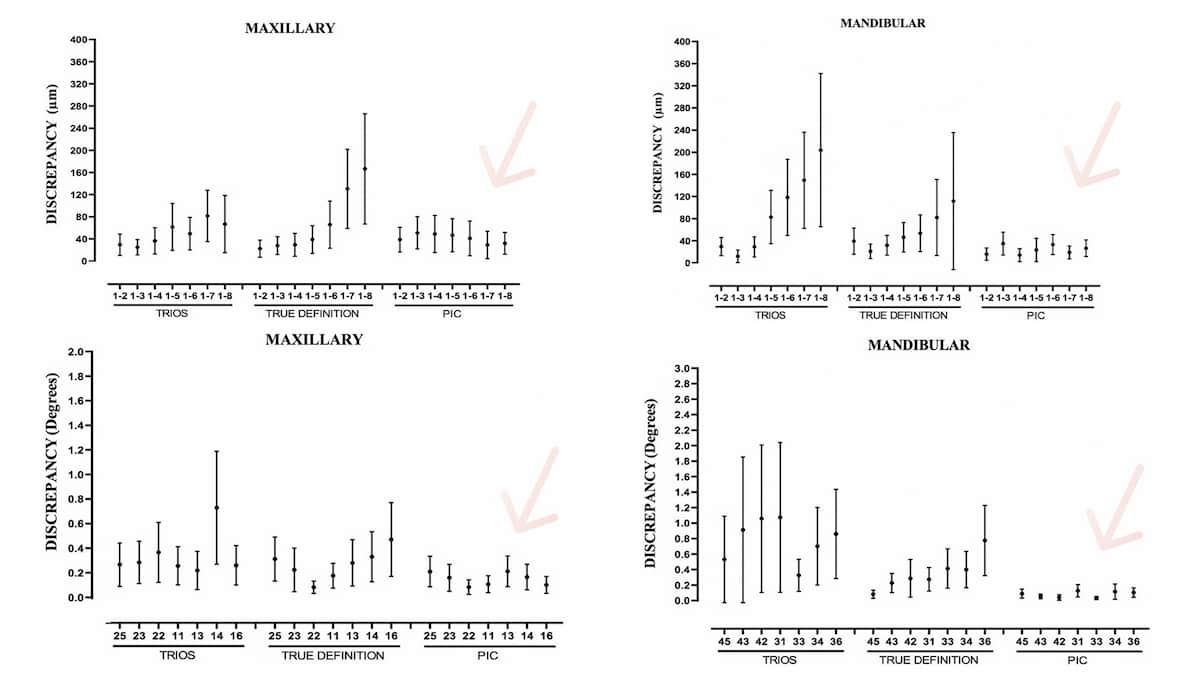 The PIC system had the best precision in all cases. The resulting mean error and deviation graphs for distances and angulations are impressive to observe and they also reveal another characteristic unique to the PIC system’s technology: there is no increase in mean error nor deviation as the measurement distance within the arch increases further away from the 46/26 abutments chosen as the reference point.

The limitations of stitching in intraoral scanners

An intraoral scanner captures images covering a very small volume, with a field of view that’s on average less than 1 inch. Therefore, in order to scan larger areas, the intraoral scanner must be moved inside the patient's mouth.

During this movement, the scanner continuously captures images of smaller areas that must be merged to build a three-dimensional model of the scanned area. This merging is performed by the stitching algorithm specific to each intraoral scanner. 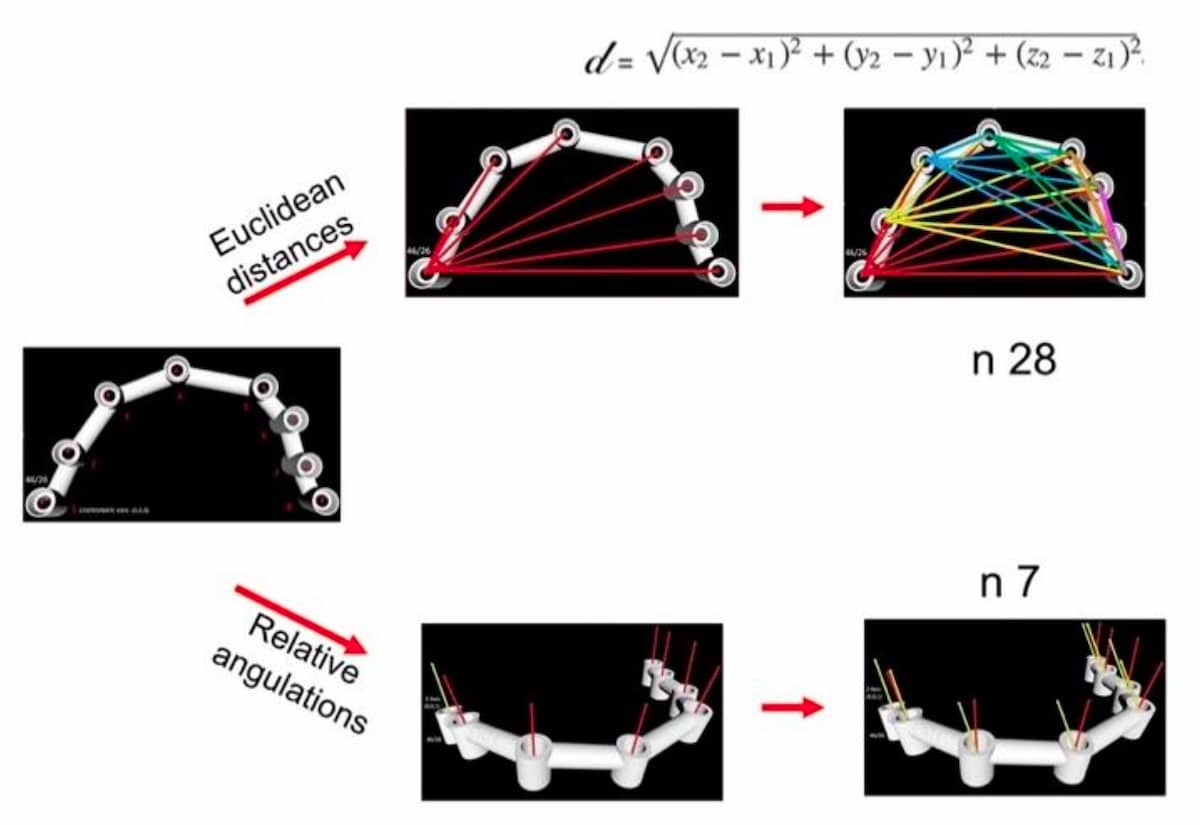 The stitching process inevitably introduces small errors during the joining of images. As the study mentions, “As the scanner moves away from the starting point, there is an increasing pattern of imprecision”. These errors will increase with the surface to be captured because any small deviation will add to the following deviations that arise.

The deviation graphs of this study provide a clear example of the stitching effect as the discrepancy of both of the intraoral scanners used in the comparison increases with the distance from the reference abutment in the full arch. This increase continues all the way up to over 300 microns cross-arch in the maximum error case while the legacy PIC system keeps a consistent response of its measurements regardless of the maximum distance between implants.

On the other hand, these results also demonstrate how intraoral scanners could be sufficient by themselves for achieving a good fit in some multiple implant restorations when limited to 2-3 implant bridges, where their deviation stays relatively consistent.

The PIC system provides guaranteed passive fit in all full arch implant restorations, and it actually works in tandem with your existing intraoral scanner, which can provide the soft tissue data that completes the patient’s digital model where implant positions and angulations are precisely captured by the PIC system.

We congratulate the hard work of the authors, as in vitro clinical studies are more complex and challenging in order to achieve rigorous results working with real patients. The findings are consistent with the increasing body of scientific proof that, by 2022, already includes over 18 independent, peer-reviewed studies of the legacy PIC system that consistently demonstrate that its accuracy (both trueness and precision) is well below the acceptable discrepancies for a full arch passive fit, making it the world’s most precise implants oral scanner.

In 2022, PIC dental released a new generation of the PIC system. It includes a new PIC camera model that builds upon the previous generation with Micron Vision camera modules that increase the system’s precision by 30% when compared to the legacy PIC camera. We are looking forward to the scientific community’s work in the upcoming months and years to corroborate the performance of the new PIC system.

This in vivo clinical study compared the accuracy of various optical impression systems in a full arch, resulting in the PIC system providi... 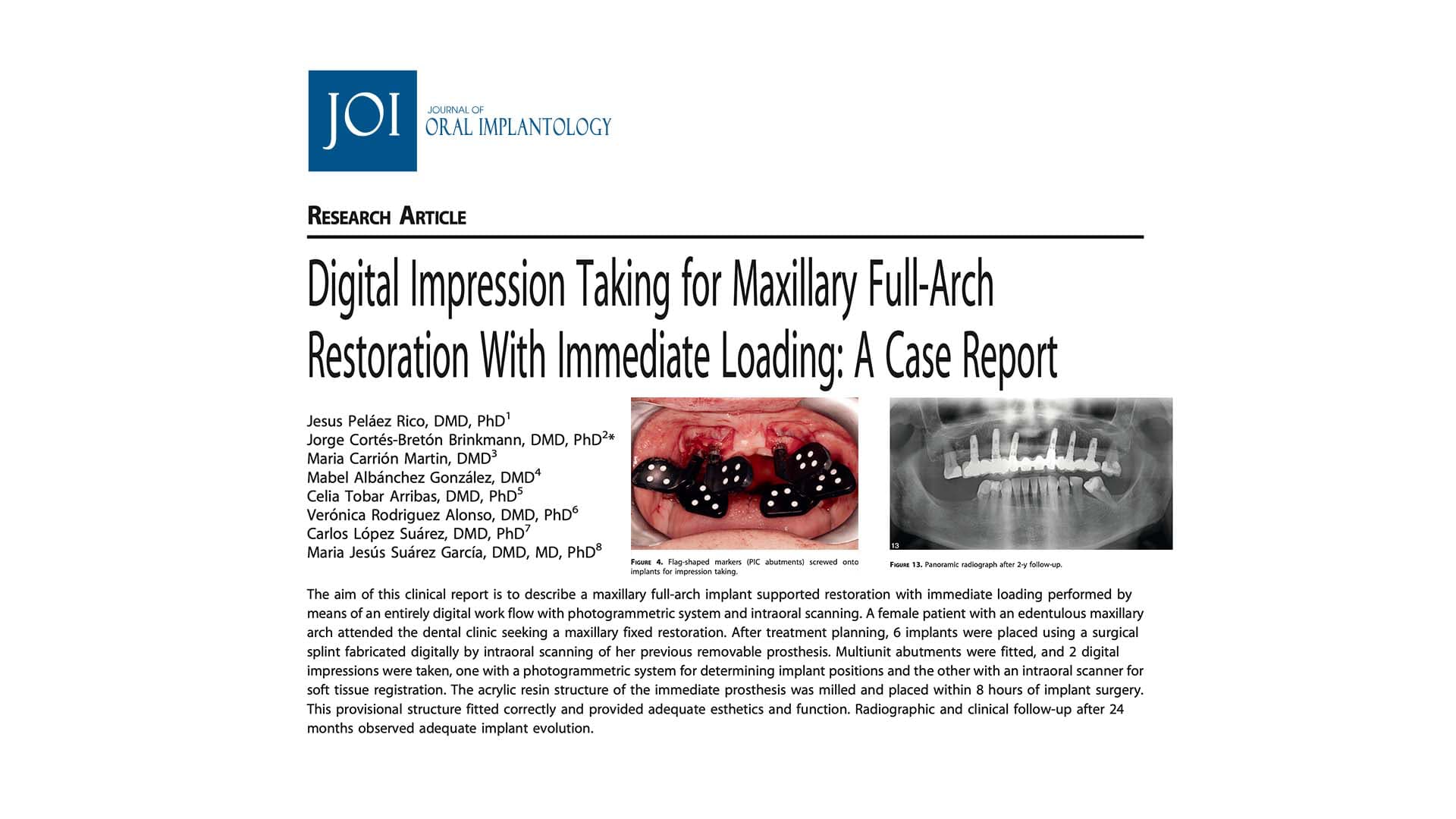 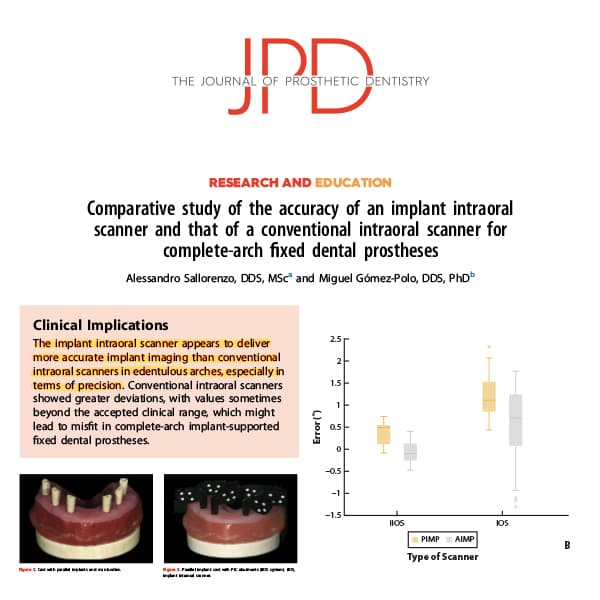 This in vitro study compares the accuracy of the PIC system with an intraoral scanner on a 6-implant full arch model. In the results the PI...