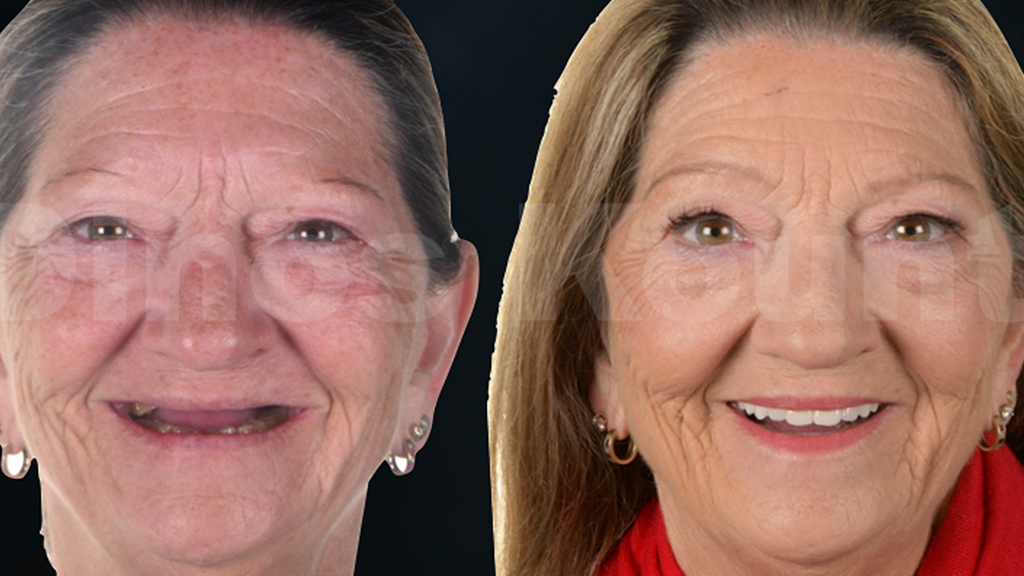 Extraction of all maxillary teeth and the placement of 6 implants to retain and support a fixed prosthesis. Restoration of all mandibular teeth with minimally invasive bonded ceramic restorations.

Dr. Dinos Kountouras BDS, MSc, PhD is a dentist at Dental Implants and Aesthetics in Queensland, Australia. He recently conducted a clinical case using the PIC system for a full mouth rehabilitation with a digital workflow.

A 60-year-old female patient was referred to Dr. Dinos Kountouras by her general dentist to receive a full mouth rehabilitation treatment.

The patient’s main complaint was that the aesthetics of her smile were lost over the years and her oral function was compromised due to the wear of her teeth. She was aware of having a tooth grinding habit and her treatment wish was to obtain a fixed rehabilitation that would best address all her aesthetic and functional demands.

The patient's medical records indicated a history of chronic acid reflux that was improved over the last years with medication and a change of diet.

The patient was presented with various treatment options. In the maxilla, she decided to proceed with the extraction of all her maxillary teeth and the placement of 6 implants to retain and support a fixed prosthesis. In the mandible, she decided to proceed with a restoration of all her mandibular teeth with minimally invasive bonded ceramic restorations.

All digital patient record files were imported in exocad® to proceed with a facially driven digital design of the smile in centric relation using the patient's own jaw movements as exported by the MODJAW® device.

A digital wax up was created, and silicon keys were made.

An immediate intraoral mockup was tested to gain some feedback from the patient regarding the aesthetics of the proposed smile.

The patient was happy with the aesthetics achieved. Therefore, they proceeded with the manufacturing of PMMA temporaries according to the accepted intraoral mockup.

In the maxilla, a staged extraction approach was chosen, by maintaining 3 natural teeth so that a fixed tooth borne PMMA provisional restoration could be delivered.

This way, the patient had the opportunity to assess the aesthetics long term and function of the prescribed tooth set up. At the same time the provisional retention of teeth aided towards the accurate intraoral stabilization of the surgical implant guide.

The provisional prosthesis was worn by the patient for about 8 weeks. The patient remained happy with the function and aesthetics achieved and there was no need for any further adjustments.

6 implants were placed with a prosthetically driven approach according to the tooth setup of the provisional prosthesis using a universal guided surgery system (Sireal® by Southern Implants). The implants were immediately loaded using a titanium reinforced PMMA provisional.

An intraoral scan of the provisional restorations and a scan of the maxillary soft tissues were also done using the Trios® device.

A new digital record of the mandibular jaw motion with the provisionals using the MODJAW® device was also obtained in order to ensure the accurate record and orientation of all jaw movements at the established treatment position.

The lower teeth were prepped, and a final impression was taken. The PIC file together with the rest of the soft tissue data files were imported in exocad® in order to design the final implant borne maxillary prosthesis, and the minimally invasive bonded ceramic mandibular restorations.

A 3D-printed composite maxillary prosthesis was manufactured and tried to assess the passivity fit, and visualize and assess the occlusal contacts as well as confirm the position of the teeth before the manufacturing of the final prosthesis.

The 3D-printed prosthesis was perfectly adapted, the occlusal contacts were refined using the Tscan® device and the patient was very happy with the final tooth position.

Minimally invasive veneer and tabletop CAD ceramic restorations were manufactured and bonded to the mandibular teeth.

The final maxillary implant prosthesis was manufactured by first milling a cobalt chrome framework and then milling and bonding a zircon full contour overlay bridge over the framework.

The zircon bridge was minimally layered with porcelain to enhance the final aesthetics.

The upper final implant prosthesis was delivered. The passivity of fit was superb, the patient was very happy with the aesthetic and functional results achieved. The prosthesis was finally torqued in place at the review appointment.

A night guard was also delivered at the end of the treatment.

This clinical case wouldn't be possible without the help of Werner Sauer Smile Design, in Brisbane, Australia providing technical work. 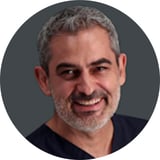 This case was done by Dr. Dinos Kountouras at Dental Implants and Aesthetics in Gold Coast, Queensland, Australia.

Extraction of all maxillary teeth and the placement of 6 implants to retain and support a fixed prosthesis. Restoration of all mandibular t...